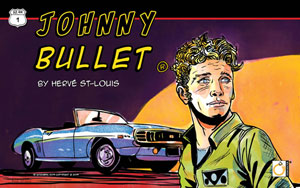 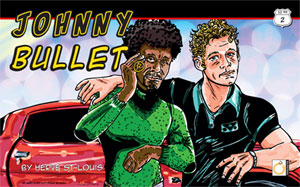 In Issue Two, Johnny street races against the Leduc brothers in Cross Roads. 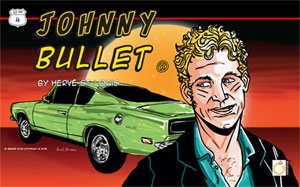 Johnny Bullet’s adventure in Cross Roads, Tennessee ends as he faces the major antagonist who is responsible for bringing him in for the pageant show while facing the Leduc Brothers. 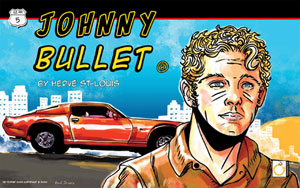 Johnny Bullet returns to Rapid City to wage a race at a local NASCAR race. 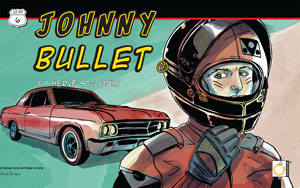 Detective Barbary and former-heavyweight boxer Altheo Givens figure out who sabotaged Doug Hawthorne’s Challenger during the movie shoot, causing the mechanic to die. 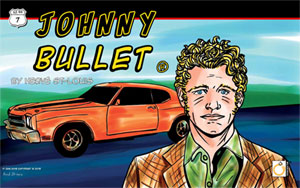 Flashback told as a wordless comic that shows how Johnny Bullet chose Sergei Moreau as his manager while an up and coming celebrity in 1969.

A Man and His Ride 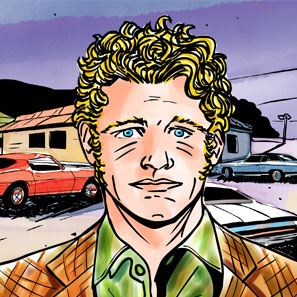 Johnny Bullet is the first comic book series that I have released publicly. I have been creating comics since I was six-years-old but never shared them with the public. I lost all my animation and comic drawings in the 2013 Calgary flood. Thus, without a physical portfolio, I created Johnny Bullet in 2014. Johnny Bullet is inspired by the classic Frank Frazetta Johnny Comet comic strip and by the late-actor Steve McQueen who was an avid racer and adventurer. This comic has been very important for me since and given my life much balance. I draw Johnny Bullet weekly and release most pages as a webcomic at ComicBookBin.com.

I have compiled, cleaned up, and re-lettered the first issue/chapter of Johnny Bullet and am releasing it as a digital comic. In this story, I introduce readers to Johnny Bullet’s world and his first racing adventure as a teenaged racer. I am currently drawing issue seven of Johnny Bullet and intend to eventually release all issues in a series of books in colour. With Johnny Bullet, I am rebuilding my lost portfolio and engaging with a comic strip that I can easily see myself drawing for the rest of my life.

A brash but clever professional drag racer gets embroiled in local street racing and small town politics after evading the suspicious murder of his best friend.

It’s all about the race for 1970s professional drag racer Johnny Bullet. When he isn’t racing or performing movie stunts, he’s street racing across America. Dodging villains and chasing women, few can catch up to him. Always riding, Johnny can hardly stay put. He’s running from himself and others.

26-year-old daredevil Johnny Bullet is obsessed with riding muscle cars. Except when it’s racing-related, Johnny seems to run away from responsibilities such a finances and relationships. He prefers smashing into things and street racing without thinking about the consequences of his actions.

The strip is a must for fans of muscle cars, auto racing, and old school adventure. The series is for an all-age audience.

The stories will be collected later as printed volumes once they are coloured with water-colours.

A link to the comic will be sent to you by email once the purchase through Paypal is completed.

“Johnny Bullet is a tough guy. He's brave. He's clever and he drives muscle cars for a living. Sometimes (okay, most of the time), he solves crimes. Johnny Bullet is a newspaper style action adventure comic with a retro 1970s feel. The story and art pay homage to that vintage. An action adventure hero, Johnny Bullet is a stunt driver, a racing car driver. He doesn't have any ulterior motives or a dark side. He's just a good guy wanting to do the right thing to the best of his abilities. Always active, he's always punching and smashing into things and driving fast cars.”
@ozoneocean (Michael John Morris), The Drunk Duck.

"There’s racing, the glitz of 70’s movie making, the undertones of an unrequited love, and a dangerous mystery. In lesser hands, this could have ended up a big mess, but here it is masterfully executed."
Melissa J. Massey, Tap-Vision.

The Bullet With Johnny's Name On It
Guest Column, Bleeding Cool Comics