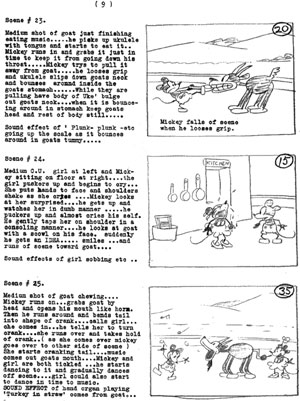 Written summary of a workshop given at the Faculty of Information on Storyboarding, January 2014

Storyboards started as visualization tools for animated cartoons. Communicators adopted them to plan films, and multimedia projects like DVDs, apps, and Websites. Visualizing is a skill independent of drawing skills used in the creation of storyboards that anyone can learn. If you can imagine and draw stick characters and basic shapes, then you can create storyboards.

Storyboards are a form of sequential art, the underlying art form known as comics. So while storyboards are comics, they are drafts and rough documents, not polished pieces. Their form is intermediary and meant to represent another medium such as animation, film or a mobile app.

Storyboards contain two information-rich areas. One is a visual. The other is textual and conveys other forms of information such as sounds and metadata. Effective storyboards replicates information in several different format side by side, frame after frame.

Each frame represents one main event happening in the end medium. Storyboard artists draw the content of the frame and add relevant information related to the visuals. Every time something major happens in your project, you should draw a new frame. The accumulation of frames mimics what is happening on the screen through time.

There is unfortunately, no magical way to get this kind of visualization skill. It is a tacit skill that you can understand only if you attempt to create storyboards. Repeat simple everyday scenes and try to sketch them out on paper as a series of drawing with basic information. The more you practice this, the better you will get at it. Storyboarding is a qualitative skill. Although you should know of a few formatting guidelines, there are no magic tricks when creating a storyboard.

There are many formats to storyboards. There are also tools sold by several software vendors to help you create storyboards. I suggest relying on a blank sheet of paper and several sharpened pencils. Software can get in the way of your visualization skills. It makes you focus on a programs’ interface and its constraints, rather than on the idea that you want to illustrate. If you don’t like a drawing, just toss away the sheet and start again. Don’t dwell too long or over think a drawing. If it gets confusing, just start over on a new blank sheet of paper. That’s why I suggest that people new to storyboards don’t use erasers. Dr. Betty Edwards (1979) argued that critical thinking while drawing stops creativity. You can create a basic storyboard by taking a sheet of paper and drawing straight lines with a ruler to create your various frames. That’s all you need to start off. Every storyboard artists develop their own templates over time. All that’s needed is something that you are comfortable using.

To help your learn to storyboard, start with a simple written scenario. You’ll notice that you can translate every action into a frame. 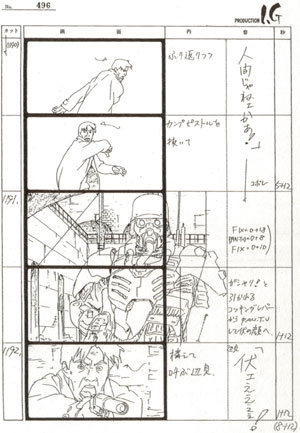 When creating storyboards, we often need to document camera movements. You may have heard the terms “trucking, pan, zoom in, birds’ eye view, wide shot and close ups. Trained cinematographers and animators know when to use them and when to avoid them in their storytelling. These instructions should be in your storyboards. Daniel Arijn has written an excellent book titled Grammar of the Film Language. I have lent it to friends many times and lost it every time (I’m on my fourth copy). It lists every possible kind of shot and camera movement you are likely to see in an animated or live action film.