A man and his ride

Johnny Bullet is a comic created by Hervé St-Louis. Set in the 1970s muscle-car obsessed America, professional drag racer Johnny Bullet escapes from Mt. Rushmore to Cross Roads, Tennessee following the death of his long-time friend and mechanic in a suspicious car crash. Even in a small town like Cross Roads, Johnny cannot escape the spotlight, and quickly it turns him into a target. Will Johnny steer through the messy small-town politics and nonstop street racing in time to find out the rational behind the murder?

Originally published online, Johnny Bullet reads like a classic newspaper adventure comic strip. Johnny doesn’t solve crime through fancy heroics. He wins through racing and fist fights. The strip is a must for fans of muscle cars, auto racing, and old school adventure. 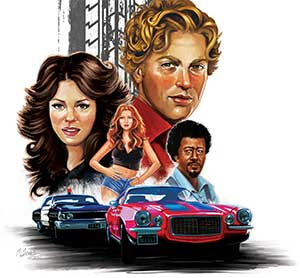